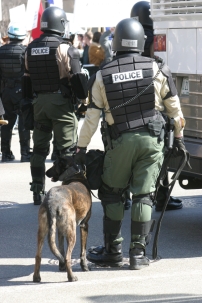 Downtown Chicago’s ornate Palmer House hotel will host the 74th annual Midwest Political Science Association (MPSA) conference, as it does every spring.  Eight miles away, Pulaski Road is where a Chicago police officer fatally shot Laquan McDonald on October 20, 2014: one of a series of police shootings sparking a nationwide protest movement.

Is it possible for political scientists to speak to this?  Can professors, students and practitioners in this academic discipline say something immediate, real, and relevant about what matters in today’s politics?

Critics may scoff.  When the MPSA is in town, scores of nametag-clad researchers are discharged at lunch and dinnertime into downtown Chicago, where popular venues like the Berghoff Restaurant and Miller’s Pub play host to our conversations about arcane-sounding topics such as spatial modeling, choice voting, and game theory.  To the snarky, this may invite the age-old distinction between “theory” and “the real world.”  Yet the distinction is false.

Real, meaningful academic theory is not an escape from the world but an engagement with it– an attempt to grapple with that world in ways that shed light on what we know, what we don’t know, and what we think we know but really don’t.  It also points the way toward new ideas and further research.

The issue of police shootings is a case in point.

Numerous papers, panels, and roundtables at this year’s MPSA conference will tackle both the normative (values-based) and empirical (data-based) issues surrounding this live issue.  For example, one paper by Jay Thomas Jennings and Meghan E. Rubado features a Local Level Analysis of Fatal Police-Involved Shootings, while a roundtable chaired by Candis Watts Smith will consider Race, Media, Protest, and Politics in “Post”-Ferguson America.   Regarding public opinion, Mark R. Joslyn and Donald P. Haider-Markel consider Attributions for Police Treatment of African-Americans, while Kimberly Gross, Emily Kaplan, and Emma Haberern assess Racial Frames in Mainstream Media and on Twitter, as regards the earlier police shooting in Ferguson, MO.

Political scientists will also give careful attention to the protest movement that has arisen in response to this issue.  Binneh S. Minteh offers A Comparative Analysis of Protest against Police Violence in Ferguson, Baltimore, and Cleveland, while Megan Elizabeth Osterbur and Jodi Deshae Hill will be Analyzing the Role of Women in the Black Lives Matter Movement and Kerra Shantina McCorkle asks Does Twitter Serve as a Political Outlet for Underrepresented Populations.  Finally, regarding possible changes in response to the controversy, Katherine Levine Einstein, Kris-Stella Trump, and Vanessa Williamson consider Black Lives Matter and Mayoral Attitudes Towards Police Reform.

The titles above represent only those which are immediately, directly tied to the issue of police shootings, and only the ones I saw upon first reading of the preliminary program.  The 2016 MPSA conference will also host innumerable papers, posters, roundtables, and book discussions on closely-related topics such as citizen trust in government, racial divides in public opinion, voter turnout in local elections, and the role of old and new media in framing news stories.

Meanwhile, other MPSA papers will tackle contemporary topics like the politics of immigration in the U.S. and Europe, the 2016 U.S. Presidential elections, the role of money in politics, political change in China, and corruption in Latin America, just to name a few.

Anyone curious to learn more about how political science can re-engage in contemporary politics is invited to join the conversation.

See you in Chicago. #MPSA16

About the author:  Michael A. Smith is an Associate Professor of Political Science at Emporia State University where he teaches classes on state and local politics, campaigns and elections, political philosophy, legislative politics, and nonprofit management. Smith has contributed to multiple media outlets and is also a blogger for the 2016 MPSA conference in Chicago.  Follow Smith on Twitter.

One thought on “#MPSA16– Is Political Science Still Relevant?”