Even if Hillary Clinton shatters the “highest” glass ceiling this November, for many years to come women are likely to remain under-represented in elected offices in the United States and throughout most of the world’s democracies. If bias on the part of party leaders or voters explains some of this variation, we can imagine three ways that such bias might operate.

The second type of bias would arise when voters or party officials “read” a candidate’s characteristics in different ways depending on the candidate’s gender. For example, if voters were confronted an otherwise identical male and female candidates, each of whom had two children and reasoned: “well, he has good experience and, given his family commitments, he is likely to be a responsible leader” while at the same time thinking “she has good experience but, given her family commitments, she is likely to be over-taxed if she is elected”, then they display bias (perhaps unbeknownst to themselves) against women.

The third type of bias is the most subtle, and therefore the most difficult to observe and confront with public policy and hiring best practices. But our study shows that in some contexts, it may be the most pervasive form of bias that female candidates face. In order to understand how each of these types of bias work, we embedded conjoint experiments into surveys of three groups of people: public officials from the United States; national-level legislators from around the globe; and American voters.

Conjoint experiments ask survey respondents to determine the winner of an imaginary competition between hypothetical candidates using nothing but simplified resumes to guide their choice. In our study, each candidate’s resume contained information including gender, political experience, marital status, number of children, and previous occupation.

In order to determine which characteristics were worthy of examination, we looked at the background traits that are commonly associated with female politicians and those that are commonly associated with male politicians. For example, the work of Susan Carroll and Kira Sanbonmatsu shows that since 1980, teaching has been the single largest feeder career for women in state legislatures in the U.S., while careers in law were the most common for men. Women who enter politics are also likely to be older, have fewer children, and more likely to be unmarried than men who enter politics. These different patterns are what Carroll and Sanbonmatsu term the “gendered” pathways to political office. 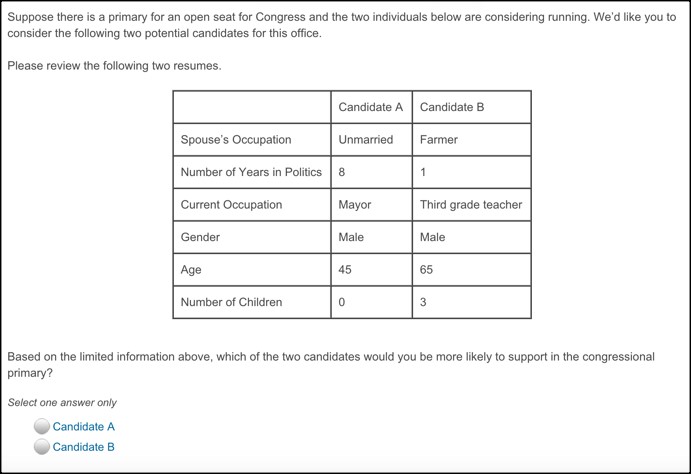 To examine the role of each type of bias, we conducted three tests. First, we looked at whether, all else equal, male candidates were preferred to women. Remarkably, we do not find much evidence that women are discriminated against as women in this way. In nearly all of the surveys (and most sub-groups) women actually get a boost over men. This female preference is strongest for respondents who are themselves women, and it does not exist among Republican leaders and voters in the U.S., or independent voters, though neither group shows a type 1 male bias.

Second, by looking at interaction effects, we can see whether certain attributes become more important depending on the gender of the candidate. We find that men and women are evaluated similarly if they have high versus low levels of political experience, if they are unmarried, and they have particular previous occupations, however some respondents seem to penalize women more harshly for having children than men.

In sum we don’t find much evidence of explicit bias against women, as women, and it seems that given the same characteristics, male and female candidates are evaluated similarly for most traits. However, the typical profile of female candidates—their age, marital status, family characteristics, and career backgrounds—are de-valued by leaders and voters, and thus may hinder their careers.

Hillary Clinton exhibits some although not all of the female pathway to politics. If she wins, in spite of having only one child and getting a relatively late start on her elective career, we can only hope that it might change the way voters evaluate candidates, erasing gender bias in the years to come. Until then, there is more work to be done understanding how gendered pathways influence political selection.