“Trump was an alternative to interchangeable robots whose goal is to avoid saying anything interesting.” – Molly Ball, political reporter, The Atlantic

“If you wanted to write a playbook for how to lose an election, Trump did that and he won anyway.”  – Steve Peoples, AP reporter

What rotten luck for political scientists! We had just become established as purveyors of credible data analysis that can help real-world political campaigns target their resources, and then… Well, see the quotes above. 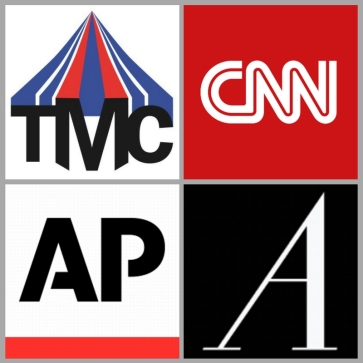 The quotes came from this year’s MPSA roundtable on the media and the 2016 election, in which Ball and Peoples were joined by CNN reporter Nia-Malika Henderson and political scientists Jennifer Lawless of American University and Danny Hayes of George Washington University. The discussion was free-wheeling and wide-ranging, but a few themes did emerge. First, Democrats are in a world of hurt. Second, Trump mobilized voters that do not normally vote, both in the primaries and in the general elections. Third, Trump opponents should be on notice — his popularity among his base is rock-solid and the Democrats offer few alternatives right now, save the simple, unconvincing negation of being not-Trump. Fourth, the news media did not take Trump’s candidacy seriously and thus did not rigorously fact-check his claims until well after he became a serious contender. Fifth, regular folks, including women, do not take Trump’s offensive rhetoric regarding gender as seriously as do those of us in the establishment bubble.

Finally comes the theme that relates to Molly Ball’s quote above; one which will trouble political scientists. Trump ran against the very political establishment which our discipline helped to create. Unless Trump’s election is a pure aberration — which these reporters doubt — the data-driven political consultancies discussed in Sasha Issenberg’s seminal book The Victory Lab lie in shambles, and the future for political scientists in campaigns is unclear.

A very brief history: while the study of politics goes back to ancient civilizations, the modern-day discipline of political science emerged here in the United States. In the early twentieth century, the discipline was associated with scholars such as W.W. Willoughby, and Woodrow Wilson, who later became U.S. President. Early political science was largely descriptive, focusing on what we now call institutions — Congress, the Supreme Court, and the Presidency (the office, that is, not just personal biographies of presidents, which are the bailiwick of our colleagues in History).

In the 1920s, scholars like Charles Merriam, who ran for mayor of Chicago, began to turn the discipline toward analysis of behavior. His classic book on non-voters was an early attempt to suggest that if the reasons why people don’t vote could be isolated, they could also be ameliorated. Happy days, and higher voter turnout, would surely follow. The belief that human behavior was subject to scientific analysis and “correction” was perfectly in keeping with the spirit of the times, where scholars in other disciplines promoted such approaches. Engineer Frederick Taylor, for example, believed that “scientific management” could bridge the gap between labor and management with a common goal of efficiency. In our discipline, public administration scholars like Wilson suggested similar goals for those working in growing bureaucracies: efficiency, not ideology. In practice, like Merriam’s failed bids for mayor, it didn’t quite work out as planned.

By the 1940s, the advent of early computers and spread of the telephone opened up new research avenues. Studies of voting behavior using polling proliferated at Columbia and Michigan, with Michigan’s iconic Institute for Political and Social Research (ICPSR) eventually emerging on top. Through the mid-to-late 20th century, data-based analyses of voting behavior were sobering, even cynical, with classic studies like The American Voter suggesting that most Americans had little understanding of political ideology, and that relatively well informed, strong partisans cancel out one anothers’ votes, leaving elections in the hands of the least informed, most fickle, undecided voters. By the 1970s, many political scientists went so far as to assert that campaigns had little impact, with fundamentals like the state of the economy and presidential approval telling us all we need to know, to predict the next election.

Next came rational choice theory, which rested on the assumption that individuals take rational actions in pursuit of goals (the goals themselves could not be judged as rational or irrational, only the actions; the goals simply were.) Rational-choice resembled economics and featured very sophisticated, mathematical models, some of which utilized no data and were purely theoretical. The goal was to make the study of human, political behavior more truly scientific, with rigor resembling the physical sciences — but then came the backlash.

The ‘90s saw Green and Shapiro’s Pathologies of Rational Choice Theory achieve great popularity by skewering “rat choice” as un-useful in predicting real-world outcomes. Meanwhile the discipline’s perestroika movement took its name from the reforms of Mikhail Gorbachev and sought to re-establish traditional approaches like area studies in comparative politics. They even ran rival candidates for the boards of political science associations, and won enough seats to make their point.

By the early 2000s, the new trend was experimental research. In particular, Yale’s Alan S. Gerber and Donald Green conducted field-based research on what approaches and messages were most effective at mobilizing voters (they concluded that old-fashioned, in-person canvassing worked best). As documented by Issenberg, political campaigners began to notice. While initially skeptical, political campaigns began to hire political scientists as consultants. Gerber and Green helped out on Rick Perry’s bid for Texas Governor, where they targeted media buys and candidate appearances. Karl Rove, George W. Bush’s right-hand man, was also a fan. Democrats noticed, too. In 2008, Barack Obama’s campaign invested heavily in these political-science-based approaches, making very precise, precinct- and even voter-level predictions and targeting appeals accordingly. Obama’s victory only encouraged them, and the consultants were back in 2012, this time working for both campaigns.

As documented by Issenberg, the data-driven revolution in campaigns was nearly complete, old political hacks having to share the back rooms with these new number-crunchers. Targeting displaced market-share-based TV ad buys as the go-to strategy for serious candidates.

As Peoples notes in the quote above, Trump’s campaign used none of these insights. There were no political scientists on staff. There was no targeting. Trump’s preferred and often his only strategy was campaign rallies, widely dismissed by our discipline as only mobilizing those who already, enthusiastically support the candidate and having no effect on undecideds or those needing mobilization. Peoples points out that Trump campaigned as if bound and determined to do the opposite of everything detailed so carefully in The Victory Lab. And he won.

Granted, political scientists pushing for renewed relevance in our discipline did not put all of our eggs in the Victory Lab basket. The popular Monkey Cage blog features well-respected scholarship that speaks in real time to policy challenges, and serves as an inspiration to this and other political science blogs that have sprung up in its wake.

Yet, if Trump’s win is not idiosyncratic–time will tell–the data-driven microtargeting that had just emerged is now called into serious question. The approach may still work for down-ballot races, but we can only use trial and error to determine that. The first order of business, of course, is for our discipline to deploy our formidable skills to determine why we did not see this coming.

One thought on “The Loss Lab”