By Adaobi Duru, University of Louisiana at Monroe 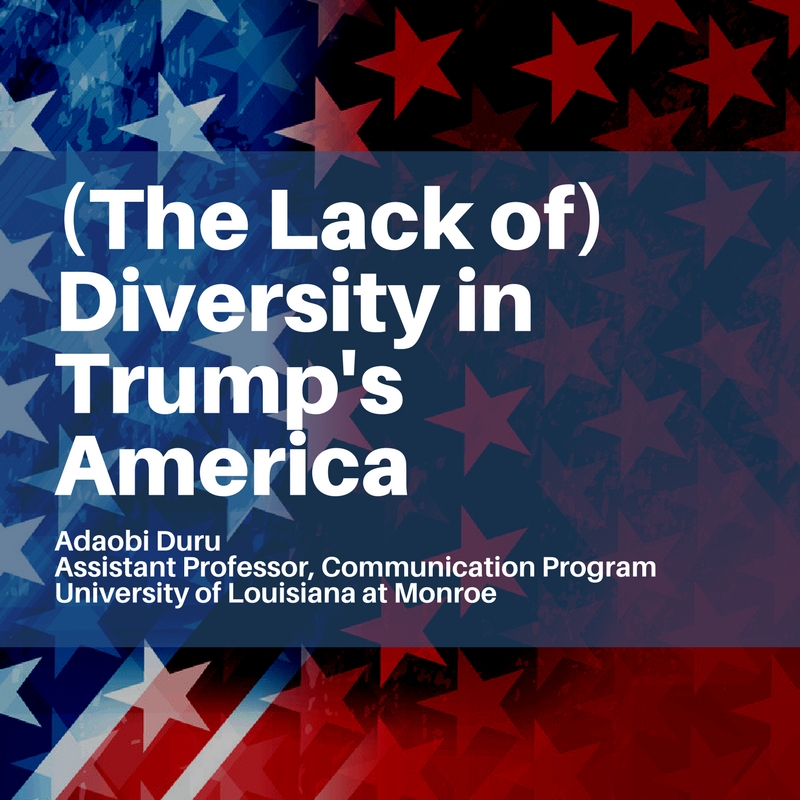 The lack of diversity in Trump’s cabinet appointment is significant and might be a reflection of the President’s position on issues regarding racial and gender equality in government. The President’s cabinet is made up of 18 men and four women. In total, 73% of the cabinet members are white men. The only black man on the team- Ben Carson was a contender for the presidency. In this cabinet, the big four positions- State, Defense, Justice and Treasury departments are manned by white men.

Journalists and scholars have written extensively on the apparent lack of diversity in elected and appointed positions in government, yet according to a Pew study, all minority groups are still underrepresented. The implications of diversity for the survival of the nation’s democracy are far reaching because of the changes happening in the country.

The United States is a considered a great nation because of its form of government – democracy is supposed to represent the common man. It is government of the people by the people and for the people, and not government of the rich and by the rich. The demographic trend of the present cabinet members is toward plutocracy. As the Washington post rightly said, Trump’s administration is the wealthiest in modern American history. One might wonder if there is a correlation between the lack of diversity in cabinet and the administration’s aversion to immigration.

Equal representation of all races and ethnicity in government has never been more important than it is now because of the demographic changes of the nation’s population. The United States is gradually becoming more diverse with rapid changes coming to many of the least diverse areas.  According to Pew, the country is projected to be more diverse than it is currently in coming years. This diverse demographic is a result of immigrants from different parts of the world arriving the united states and claiming it as home. The projection is that by 2055 there will be no single ethnic majority on the country. Therefore, the country must make intentional effort to address issues of diversity if they want to reap the abundant benefit inherent in such endeavor.

For one, because the nation is diverse, an equal representation will increase the administration’s ability to cater to people from different backgrounds and be more tolerant of other traditions and cultures that makeup the population. A diverse cabinet will likely pay more attention to minority issues than a homogeneous cabinet.

Minta (2012), found that diversity had a great effect on the responsiveness of the nation’s political institutions to minority sentiments. They found support for the argument that shifts in the demographic composition of lawmakers made them collectively more considerate to racial and ethnic minority problems. This indicates that diversity is important in government institutions because it ensures that citizens interest will be represented.

Race and ethnicity aside, women are also underrepresented in Trump’s cabinet, with only four women appointed overall (21.1% of the confirmed positions), but no woman in the big four positions. The President was embattled over his objectification of women during the election – Megyn Kelly, who was with Fox News at the time called him out on this during one of the presidential debates. While the President has denied these allegations, his cabinet appointment does not reflect his touted respect for the female gender.

Although women are as capable as men at being good leaders, a Pew study indicates that women are still in short supply at top government positions in the united states. This gender disparity in government comes with a price. According to a 2016 Mckinsey Global Institute research, closing the the gender gap in workforce participation will lead to a $28 trillion increase to the annual world GDP.

Women are not only important in business and the economy, their input in government is also noteworthy. A study conducted by Anzia and Berry (2010), revealed that districts that are served by women have certain advantages over districts represented by men. First, districts that elect women receive about $49 million more each year in discretionary spending than those that elect men. Also, women sponsor more bills than their male counterparts. Given the disadvantaged position of women in politics, Anzia and Berry found that “women will perform better, on average, than their male counterpart.”

This quote from this CNN article sums up my gender disparity argument “Simply having female leaders changes the norms about who can and what qualities are necessary in leadership. Having women in leadership roles is breaking down cultural and structural barriers–improving leadership around the world and showing everyone what women can achieve.”

By embracing a diverse cabinet, President Trump will not only communicate fairness, but also a deep understanding that policy development and other government work benefit from having different views and backgrounds at the table.